Throughout my pregnancy with Dexter, the topic of breastfeeding would always make me feel like a bit of a failure. I would instantly feel emotional when talking about my plans to breastfeed my third baby and when I look back now, I think I had given up before I had even started. I told everyone who would listen that my aim was to breastfeed my baby, for the first year of his life. But, I don’t think that I really believed that I would get any further than two months again… Until I would hear those pained cries, of hunger. I doubted that things would be any different this time. I was adamant that one day, I would stop hearing the sound of my baby gulp to the rhythm of my milk letting down… because as if by magic, it would dry up again. I was already hurt at the possibility of Dexter being forced to give up nursing before he was ready because my body couldn’t provide for him. I felt lesser.

Looking back now, I didn’t realise the mess that I was getting myself into. I didn’t realise how much the anxiety was weighing me down, so heavy and cruel. And all because I was desperate to be a breastfeeding mama. Desperate to have the choice really. For me and my baby to decide when the time was right for our journey to end.

I’m not against baby formula. Let me disclaim that Noah and Ellenah were both three months old when I officially made the switch from breastfeeding to bottles. They are both healthy, bright and happy… So, it did something right, didn’t it? I have a lot to be thankful for. I’m a big advocate in feeding your baby, by any means which will allow them to thrive, have all that they need nutritionally and to be happy. I have no opinion on mama’s who straight up, off the bat, do not want to breastfeed at all. Breast is best, except when it’s not. We all have an idea of what kind of mama we want to be though, how we want to feed and care for our babies…. and motherhood is tough. Us mama’s have enough guilt of our own that we carry around with us everyday for no reason… We don’t need to judge each other. Especially when we are only doing our best.

Judging myself though. Such a piece of cake! I found coming down on myself like a tonne of bricks, so easy…

But… I felt broken when I woke up one day and overnight, my milk supply had stopped. It would no longer let down to the demands and hungry cries of my babies. It left us without much warning at all. This happened with both, Noah and Ellenah. Two children who were born two and a half years apart! And it made me sad.

And I struggled on. Both times. I felt like I was putting them on the breast every two minutes, to try and tease the milk out. It didn’t work! I checked the latch with a health visitor at the walk-in clinic. No problem! I upped my water intake and tried to eat more, little and often. It didn’t change anything.

I remember trying to express milk when my supply had started to disappear with Noah. I was sat on the bed in the bedroom of our first home, watching him sleeping next to me. He looked so beautiful and peaceful. I didn’t know anything about breast pumps back then. I was only twenty-two years old. Mine was a Tommy Tippee manual pump… and before I started, I was hoping for magic to happen. It took me three hours before I realised that I was going to be brutally disappointed. Three hours… yes, I sat there for three hours, with red raw, cracked, painful nipples and tears streaming down my face, burning my cheeks because I felt like such a failure… and my half an ounce of mik, curdling in the bottom of my tomme tipee bottle. I put it in the fridge like it was gold. I remember that I kept checking it like somehow it would suddenly become more. Obviously it didn’t. It wasn’t  ACTUALLY magic. Not in that way anyhow.

I kept that bottle in the fridge for weeks. I wouldn’t let Matt throw it away. I hid it behind some condiments in the end because it was becoming awkward to explain away, when anyone went into my fridge and was faced with the smallest amount of curdled, sour breast milk. I couldn’t explain it because I hadn’t made any sense at the time, of why I couldn’t bring myself to tip it away. And it angered me that I would potentially have to apologise for it being there. It was my baby’s milk… no matter how little… and that was all I could see.

Looking back now, I think that the moment I tipped it away, I would have to face up to the reality that it was all over for us. Even though, we were well underway with bottle feeding by that point… Don’t worry, I wasn’t in such a bad place that I let my baby go hungry. I was just feeling bruised and it made me sad.

Of course, the inevitable happened and Matt found it, tipped it, washed the bottle and carried on with his day…completely unaware of what I was going through. He thought he was being helpful. I thought he was an arsehole.

Only for a day or two though. And then I started to find peace and acceptance with our new feeding journey. It helped that with bottle feeding, we had started to get much more sleep and it wasn’t long before, both Noah and Ellenah slept through the night after we transitioned them.

Okay… so that was actually really lovely!

Anyway, I digress! Now for the elusive ‘third and final try’….

As I said, my expectations were low. But in my gut… in the pit of stomach… I so wanted to prove myself wrong. 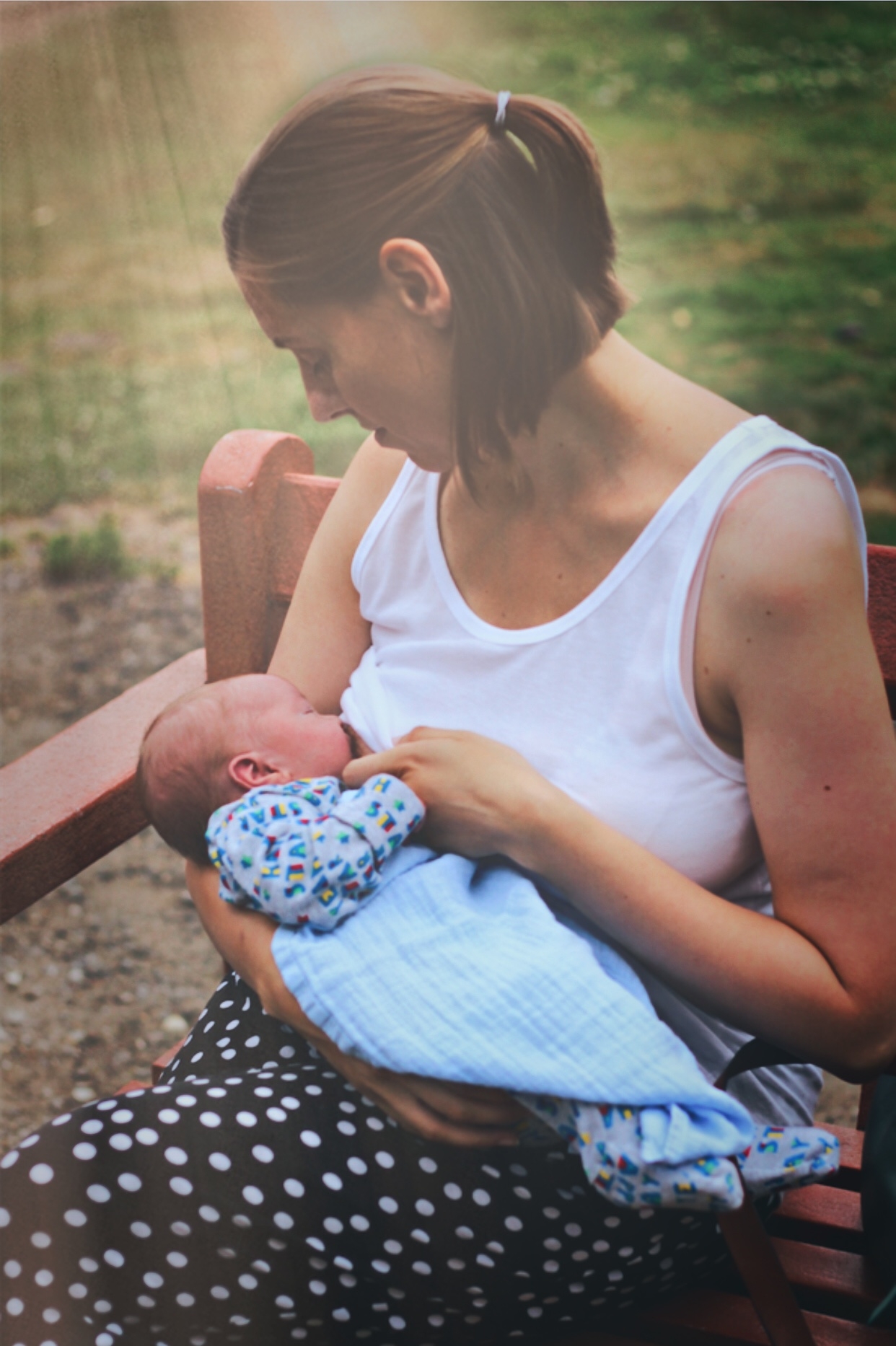 It was written in my ‘birth plan’ that I wanted ‘skin to skin’ after I had given birth to Dexter. I had requested that at the first opportunity, I wanted to breastfeed him. I had written that I would accept help…all of the help! I had written that I would like advice regarding ‘the latch’… Even as an experienced mama of two other children. Two other children who as beginners, fresh from the womb, latched like pros. But… If I could have written in my birth plan… ‘DO NOT LEAVE ME UNTIL I AM CONFIDENT THAT I CAN DO THIS AND UNTIL YOU CAN PROMISE ME THAT I WON’T FAIL… PLEASE, I’M BEGGING YOU…DON’T GO!’… I would have.

It was so important to me. I can’t stress enough, just how much it mattered.

Thankfully, after the beautiful chaos of birthing my perfect son, I manoeuvred him to nurse for the very first time. It was all so calm and he was so alert. He gravitated to me, like he knew exactly what to do.

I felt the familiar prickle as the colostrum let down and I felt like I could finally breathe. I had a feeling from that moment that things were going to be different this time… I felt different this time. Confident, happy and a bit sassy if that makes any sense? I don’t know, I felt so determined.

In that moment I told myself ‘ Ria… take it one day at a time. Get to the next day… and the next… and the months will take care of themselves!’

And that is exactly what they did!

It wasn’t even hard this time. It couldn’t have been more easy. Honestly, am I the only mama that has felt crazy happy any time that my breastmilk managed to saturate my breast pad, my really unattractive nursing bra and my top because my milk supply was INSANE? Am I the only mama who wore those milky boob patches ever so proudly?

I mean, it settled down. I finally managed to control those situations from happening as regularly… but I didn’t even care at the time. I was hardly embarrassed! Just really proud in a way… And a little pissed off that some had gone to waste in another.

Dexter nursed a lot, right from the very first day. Little and often. It was intense… but I didn’t have it in me to feel negatively towards our journey, even once the sheer exhaustion from such tiny sleep and feeding on demand had hit me. I was happily shattered. Happily delirious. Happily embracing this special chapter of ours. I felt like I was constantly whipping my boob out and I wasn’t even shy. It didn’t fluster me at all. Perhaps that comes with age because looking back… I was much more reserved at twenty two years old and again at twenty five. At thirty years old though… I couldn’t care less. All I cared about was getting it right and keeping my baby full up, happy and thriving.

I will always remember the day, in the lead up to Dexter’s first Christmas. He was just five months old and he was suffering with such an awful cold. It was bad… So bad! Breathing was a struggle for him and that meant he was more fussy with his feeds. At first I panicked. I was worried that I would dry up like an old prune like before, if he didn’t continue feeding as he had been.

And then when I didn’t, everything changed.

Dexi and I had a little pampering session, one morning. We had a bath together, diluted eucolyptus oil burning on the oil burner, lots of snuggles and some baby massage… To encourage him to heal from this dreadful winter cold. And as I held him, skin to skin and nursed him, while both of us were wrapped up in my red, cozy dressing gown to keep warm… I realised that we were really doing it! We were completely on the same wavelength, we were established breastfeeders and this chapter wasn’t being torn from our book. It wasn’t being taken away from us.

It was then that I felt like I could finally relax and enjoy it fully. It was so freeing… So lovely. And even though my baby was sick and it was horrible… The truth and reality about our breastfeeding journey was like a shining light that came of it. It was our silver lining in some truly dreadful days…and nights.

And from then… We kept on keeping on. Feeding on demand. Day and night. I kept on whipping my boob out. Any place, anywhere and any time.

Dexter is six months now and he is starting to wean onto solid foods… which he really enjoys. He is excited and curious by all of the new tastes and textures that baby led weaning offers him and I can sense some change for us soon. But for right now, as long as Dexter will still have me… I will be here… Not changing any of it for the world.